June Promotions for the Arizona Diamondbacks 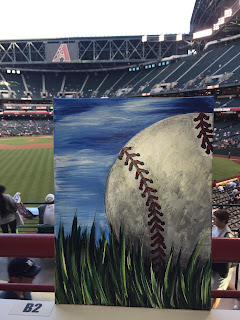 PAINTING AT THE PARK, presented by D-backs Club Series Wine: Fans were able to purchase a special package that includes a private paint session, hosted by Paint, Party & Wine, game ticket in the PetSmart Patio, a D-backs Sedona Red wine tasting and all-you-can-eat food. Fans will learn how to paint baseball-themed artwork. The event is sold out but additional dates have been announced and can be purchased at dbacks.com/paint.

PROSTATE HOME RUN CHALLENGE: In honor of Father’s Day on Sunday, June 18, and as part of the League’s ongoing efforts to raise awareness for various forms of cancer, the D-backs will have Prostate Cancer Foundation Founder and Chairman Michael Milken throw out the ceremonial first pitch. MLB fans are encouraged to visit HomeRunChallenge.org to pledge a donation for every home run hit during the 2017 campaign. Fans can also make a simple one-time donation and sign up to receive more information about prostate cancer. Each home run hit in all games beginning Thursday, June 1 up to and including Father’s Day, June 18 will raise money to fight prostate cancer.

THROWBACK THURSDAY, presented by Chase: The D-backs will wear the Alternate Home Vest Uniform (worn from 1998-2006). Every Thursday home game will be deemed part of the D-backs Throwback Thursdays (#DbacksTBT), presented by Chase, and fans can expect to see the retro purple and teal colors incorporated in every game element at Chase Field, including signage, video and photos on dbTV. Fans are encouraged to wear the throwback purple and teal colors on Throwback Thursdays and the Chase Field Team Shop will offer a wide variety of items featuring the retro colorsfor fans to purchase. Chase credit or debit card users will receive special offers each Thursday, including:
•               30-percent discount on ticket pricing on select areas in the ballpark
•               $25 D-bucks card when they spend $75 in the Team Shop
•               Cracker Jack or Peanuts at Taste of Chase or Oasis in the Sandlot for only $1
More details are available at dbacks.com/throwback.

RJ51 “HALL OF PHOTOS” PHOTOGRAPHY EXHIBIT: D-backs Legend and Hall of Famer Randy Johnson will showcase his photographic works to select Season Ticket Holders and Suite Holders beginning at 5 p.m. in the Legends Suites & Conference Center at Chase Field. Those in attendance will have the opportunity to purchase Randy’s personal artwork at the event, with a portion of the proceeds benefitting the Arizona Diamondbacks Foundation.

NATIVE AMERICAN RECOGNITION DAY presented by GILA RIVER CASINOS: The D-backs will recognize several of Arizona’s Tribal Royalty contingent during a pregame ceremony and will have traditional song and dance groups on site that will perform throughout the ballpark and on the field before the game. Festivities begin at 5:00 p.m. and include Native American drum groups, dancers, vocalists, artisans, educational exhibits and more. Miss Gila River, Anissa Garcia, will throw out the ceremonial first pitch, Bob Villa will sing the national anthem and color guard will be posted by Haskell Osife Antone American Legion Post #51. In addition, for those who purchase tickets using the promo code NARD at dbacks.com, $2 from each ticket will benefit the Phoenix Indian Center and the Inter Tribal Council of Arizona. For more information, visit dbacks.com/nard.

D-BACKS INTER-TRIBAL BASEBALL & SOFTBALL TOURNAMENT RECOGNITION: The D-backs will recognize the top four teams in each division and pass out trophies to the team MVPs and championship teams during a special pregame recognition. More than 1,300 participants from the tournament will also participate in a pregame parade around the field.

FRY’S DIAMOND DAYS PROGRAM: Fry’s Food Stores and the USO will treat more than 200 military members and their families from Davis-Monthan Air Force Base.

D-BACKS EXPRESS: The D-backs offer a hassle-free way to see a D-backs game for fans in Tucson. A luxury bus will pick up fans at the Foothills Mall in Tucson and drops off fans in front of Chase Field, with a guarantee to receive that day’s giveaway item. Round-trip fares are $25 per person and leaves three hours before game time. For more information, visit dbacks.com/express.

BAXTER’S BIRTHDAY, presented by PetSmart: Several local mascots will join Baxter to help celebrate his birthday. Baxter and friends will greet fans at the doors from 11:30 am. - 12:00 p.m. and will be introduced prior to first pitch. All mascots, including Baxter, will sign autographs in the 4th inning at Baxter’s Den in the Phoenix Children’s Hospital Sandlot. Fans will also have the chance to sign a birthday card for Baxter throughout the game. Fans can also celebrate in La Terraza with piñatas and face painters.

PITCH, HIT AND RUN: The D-backs will host a skills competition for kids ages 7-14 to show off their pitching, hitting and base-running skills from 7-9 a.m. at Chase Field.

CHEVROLET ARIZONA ALL-STARS: The D-backs will recognize youth sports leagues in a pregame parade around the field. The event also serves as a fundraiser for youth sports teams. Last year, the program raised more than $55,000 that went back to Little Leagues across the state of Arizona.

D-BACKS INTER-TRIBAL BASEBALL & SOFTBALL TOURNAMENT – June 7-10: The D-backs will host their 19th annual Native American youth baseball and softball tournament with games played throughout the Salt River reservation and at ballparks around the Valley. More than 1,300 participants, including 76 teams, will travel from five states (Arizona, New Mexico, California, Mississippi and South Dakota) and represent more than 36 tribes and for many this will be the first time leaving their tribal reservation.  For more information, visit dbacks.com/intertribal.

BIKE SAFETY EVENT – June 9: The D-backs and Safelite AutoGlass, in partnership with Phoenix Fire and Sonoran Cycle, will give away free bikes and helmets to the members of the Boys & Girls Club Gabel Branch from 11 a.m. – 1 p.m. as part of the D-backs Safelite Summer of Safety Program. Phoenix Fire and Police will also be on site to instruct kids in safety drills.

LITTLE LEAGUE TAKEOVER – June 10: The D-backs will take over the Inter-Tribal Youth Baseball (ages 9-12) Championship game at 10 a.m. at Salt River Recreation Center. Several D-backs including Baxter, D-backs Organist Bobby Freeman, D-backs Racing Legends, Rally-backs, D-backs PA Announcer Chuck Drago and front office employees will “crash” the Championship game. The festivities will include celebrity coaches, an official in-game announcer, and other elements that fans would see at Chase Field, such as the Hot Dog Race, T-shirt Toss and singing of Take Me Out to the Ballgame.

D-BACKS ACADEMY CAMPS:  The D-backs Baseball Academy offer Youth Camps around the state of Arizona in June and July for boys and girls ages 6-14 and include baseball/softball fundamentals training, a D-backs T-shirt and cap, and free ticket to a 2017 home game with the opportunity to purchase additional tickets at a discount. For more information and to register, visit dbacks.com/academy.

ALL-STAR VOTING: All-Star voting (#VoteDbacks) is now underway through June 29 and fans are encouraged to vote for their favorite D-backs players at dbacks.com/vote.

D-BACKS BASEBALL ACADEMY YOUTH CLINICS: D-backs Baseball Academy coaches will host two free clinics for kids at Futures Field located in the Phoenix Children’s Hospital Sandlot at each D-backs home game starting one hour before first pitch and at the end of the fourth inning.

STUDENT PASS: Students will get discounted tickets, including tickets as low as $5, for select games through the Student Pass program. The offer is activated by texting STUDENT to 76925.

MILITARY AND FIRST RESPONDERS DISCOUNTS, presented by GEICO: The D-backs and GEICO will offer discounts on single-game ticket prices for all military active duty, reserve, retired and veterans, as well as active or retired fire and police personnel with valid ID, including 50 percent off every Sunday and up to 35 percent off on select games. All-You-Can-Eat tickets are excluded from this offer and can only be redeemed for up to four tickets. For more information, visit dbacks.com/military.
Email ThisBlogThis!Share to TwitterShare to FacebookShare to Pinterest
Newer Post Older Post Home