NEW! Out this week - The Swan Princess: Kingdom of Music

**Disclosure: No monetary compensation was received.  We did receive the movie & plush to help facilitate this feature. 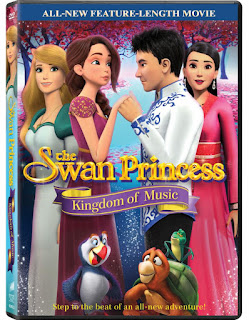 A new installment of the enchanted tale - The Swan Princess: Kingdom of Music debuted this week on both Digital and DVD from Sony Pictures Entertainment. Can you believe this year marks the 25th Anniversary of the beloved franchise that continues to captures hearts around the world?!  Fans of all generations will be coming together with memories of watching as a child or making new memories with your young one as they grow.  I have daughters and granddaughters and always get so excited when I can share something with them that I have been a fan of for years.  Our family always tries to make one weekend night a movie night where we get together, watch movies and eat.  I absolutely love family time and this movie is perfect for it.


If your kids are like mine, they can't sit still for very long without having something in their hands to play with.  My granddaughter also likes to dress up like a princess - literally everyday! lol!  Here is a quick and easy water bottle maraca that is awesome for everyone to make (no matter the age) and "shake" along with the music! 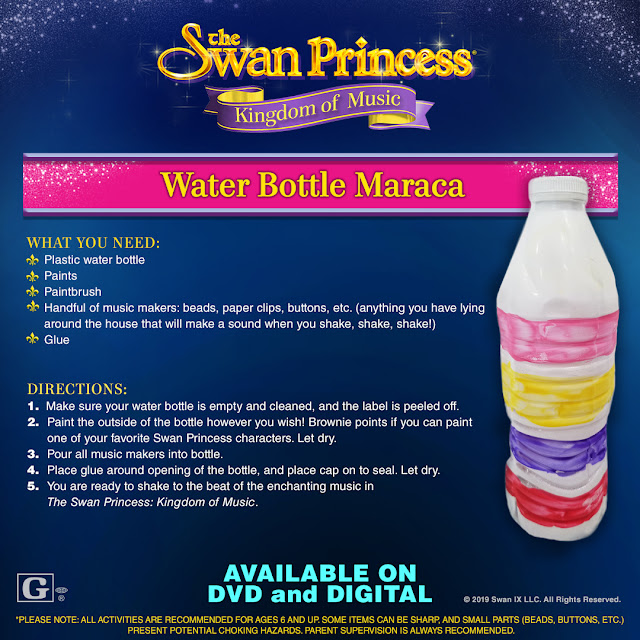 In the newest film in the series, THE SWAN PRINCESS: KINGDOM OF MUSIC, our favorite princesses are back in an all new feature-length musical adventure. Princess Odette is hosting a music competition to celebrate Princess Alise’s birthday - the winner will sing at her grand birthday ball! Prince Li of Cathay has entered, but his sister Princess Mei Li has stowed away on his ship to seek help from Odette and Derek for Chen, who has been cursed to live as a dragon. Lucas and Alise are reunited but Prince Li’s arrival makes Alise doubt her feelings. While Li and Lucas fight for Alise’s heart, Derek and Odette try to help Mei Li and Chen break the curse. Who will win the music festival and will Chen ever be free from his curse?

Included with the Kingdom of Music DVD are interactive sing-alongs featuring two all-new toe-tapping tunes from the film and a behind-the-scenes featurette that explores how the world and characters of the film were brought to life.

**Plush as seen in our Instagram post as well as other movie merchandise can be purchased here.