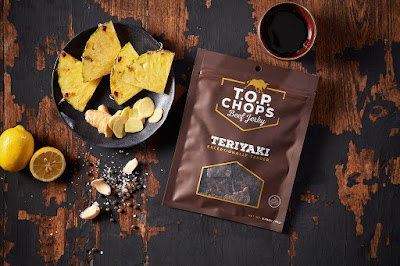 Beef jerky can be known for its tough and chewy texture, but one snack brand believes consumers deserve a more tender experience. And in honor of National Jerky Day, they’re celebrating with 50% off first-time orders. Now that is a discount you will want to take advantage of!! T.O.P. Chops Jerky is a handcrafted jerky made from American beef with no additives or preservatives, and it’s grown from an at-home hobby to a thriving, national snack brand disrupting the jerky industry—in just six short years.

Dusty Jaquins, who is one of the co-founders of T.O.P. Chops, started making jerky from his Atlanta kitchen using an old family recipe. Everyone who tried it raved over the taste and texture, encouraging Jaquins to take the jerky to market. Jaquins and his fellow co-founder, Luke Sellers, knew they had to share the southern-born beef jerky with the world.
Today, T.O.P. Chops Jerky is a national brand, offered at many major grocery retailers across the country. What makes the jerky better? Jaquins explains how special and different come down to three important things:

Most jerky that’s made in the U.S. uses ungraded meats from dairy cattle, which are cows that no longer produce milk. Jaquins says, “T.O.P. Chops changes the standard by only using USDA Graded Select or better beef that’s sourced from steers raised in the U.S.” He explains how using American beef from steers—as opposed to dairy cattle—makes their jerky incredibly tender and provides an authentic beef flavor.

The majority of beef jerky is what Jaquins refers to as cowboy jerky—it's hard, it’s tough, you have to gnaw at it. But he and business partner Sellers believe life is already tough enough, and they want to provide a more positive eating experience. As a result, they slice their beef very thin using a Veri-Thin™ slicing process. This reduces the cooking time, retains the meat’s moisture and renders an easy-to-chew jerky.

While most premium jerkies on the market have similar levels of fat, sugar, and sodium,
Jaquins wanted to offer a “better-for-you” beef jerky. To do this, he and Sellers partnered with food science and culinary experts to enhance the recipe. This effort culminated in a new ingredient called plum powder, which not only reduces added sugars and sodium but also creates a product packed with antioxidants.
The plum powder sweetens the jerky marinade. The team of jerky artisans use a small amount and let it sit overnight to give the jerky a strong, high-quality meat flavor with some subtle notes of sweetness and spice.
T.O.P. Chop Jerky comes in four flavors, including Original, Teriyaki (my fav), Sweet & Spicy and Red Chili Pepper. Jaquins recommends his personal favorite Sweet & Spicy because “I'm not a lover of extremely hot foods, and the sweet and spicy has a nice balance. It’s a mild heat with a little sweetness to it."

This jerky knows no limits!

The dried meat snack industry has seen significant growth over the last decade, and T.O.P. Chops plans to grow right along with it. Dried meat consumption is up 18% and 92% of millennials replace one meal a week with a wholesome snack like jerky. The brand is getting ready to launch in Costco and Target stores in August 2019 and has scheduled launches in other large grocery chains in September and October of this year.