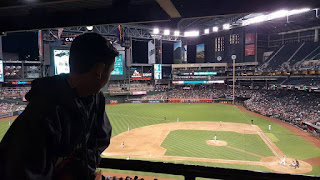 The Arizona Diamondbacks (@Dbacks, @LosDbacks) will open their 20th anniversary season this Thursday, March 29 at 7:10 p.m. versus the Colorado Rockies with a series of special pregame events at Chase Field.

Fans are encouraged to arrive early to enjoy the Opening Day Street Festival, presented by Fry’s Food Stores. The Opening Day Street Festival will begin at 4:00 p.m. in front of the Gila River Casinos Plaza along 4th Street and Jackson and will feature food trucks, D-backs inflatables, music by Sapphire Sky and several other activities. Fans can also enjoy SOL La Terraza in the Upper Right Field Concourse before the game, and features a Latin vibe with specialized décor, live music and authentic regional food. How fun!

Limited tickets are still available for Opening Day and the rest of the series against the Rockies (March 29-31), including the D-backs’ 20th Anniversary game this Saturday, and can be purchased online atdbacks.com/tickets, by calling 602-514-8400 or at the Chase Field Box Office.
Email ThisBlogThis!Share to TwitterShare to FacebookShare to Pinterest
Newer Post Older Post Home