Skee-Ball, The Original Family Friendly Game Leaps onto your Smartphone 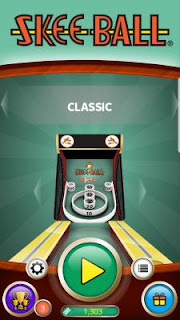 **Disclaimer: Game code was provided to help facilitate the review of this game.

After 100 years and 40 billion quarters, America's Favorite Alley Roller Game goes digital across all major platforms!  Skee Ball was my absolute favorite game as a kid!  This is the first game I would head towards anytime my family went to an arcade.   Totally loved it and my family would really get into where we would be pretty competitive and start some pretty good competitions.  So, needless to say, I was pretty excited to try this out.  Skee-Ball Plus, which captures all the fun of the original arcade game, features a host of new game variants and interactivity that are only possible on gaming devices.   I tested it out on my android phone.  It was okay and was something to keep me busy during down times and yes, it did satisfy my "Skee-Ball" craving.  Skee-Ball Plus app currently runs for $2.99.  It is also available on all major gaming systems, including Nintendo Switch, PC, Macintosh, Xbox One and the Sony Playstation 4.  I have not tested it on the gaming systems and cannot give an honest review on that side, but as far as playing it on my phone, again, it was just okay.  My daughter and I had fun passing the phone back and fourth seeing who could beat each other's score.  It's not a game you could sit there for hours with, but it is fun, competitive and of course a classic! 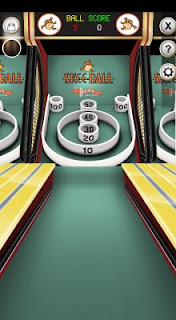 Skee-Ball Plus, which captures all the fun of the original arcade game, features a host of new game variants and interactivity that are only possible on gaming devices.  Features include:

Since it was first introduced to the public in 1908, Skee-Ball has generated a remarkable $10 billion in arcade revenues.  Bay Tek Games acquired Skee-Ball Incorporated in 2016 and has since redesigned the game with updated alleys and a contemporary sensibility that still remains key elements of the brands classic look and feel.