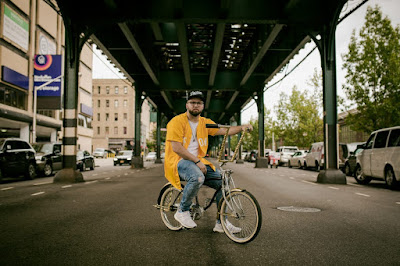 Like many kids today, Andy struggled as a child. He grew up in a single parent home in New York and we removed from the public school system due to behavioral issues. While in middle school, he began recording in his mom’s house and started selling studio time out of his closet; before long, he was a sophomore in high school running a full-fledged business out of his mother’s basement. He had also started a rap group with a few friends that led to a deal with Syracuse University's Marshall Street Records, which gave them the opportunity to open up for the major acts. As a solo MC, Andy became well known in the underground freestyle rap scene for winning battle competitions during high school and his freshman year in college.

Unfortunately, all of the success and recognition only led him away from God and towards greater sin. Headed for the big lights of New York City to attend college. But while taking a piano class his freshman year, Andy met Alex Medina (producer of “Background,” “The invasion (Hero)” who invited him to check out T.R.U.C.E. (an urban ministry that focused on evangelism via performing arts). He soon got connected with others, was discipled and the Lord began to deal with him more deeply concerning sin patterns in his life. After hearing Da Truth's “Price Tag” song, he vowed to shut down his recording studio and never use his gifts to help record music that did not honor God. He lost all his business and income, but he found his new identity in Christ.  His introduction to a larger audience came through his vocals on Lecrae’s “Background,” and he continues to pen melodic choruses, rapping remains his passion and focus for future projects. Andy has resolved to love the Lord with all his heart, soul, strength and mind—no compromise.

Free entry as well for our First Responders (Firefighters, Police Officers & EMT's) In the light of the recent tragedy in Las Vegas, we want you to know how much you are loved & appreciated!
Email ThisBlogThis!Share to TwitterShare to FacebookShare to Pinterest
Newer Post Older Post Home