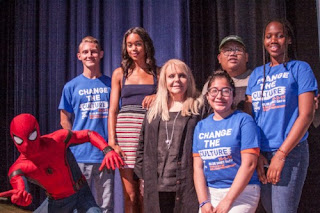 
Teaming up with STOMP Out Bullying, Laura and Jacob, along with cast mates Tom Holland (Peter Parker/Spider-Man) and Zendaya (Michelle/MJ), participated in a  PSA to engage students in the message of acceptance, inclusion and kindness.

Spider-Man: Homecoming, debuts on digital September 26 and on 4K Ultra HD/Blu-ray, Blu-ray 3D, Blu-ray and DVD October 17 from Sony Pictures Home Entertainment. Tom Holland stars as Peter Parker, who, with the help of his mentor Tony Stark, tries to balance his life as an ordinary high school student in New York City while fighting crime as his superhero alter ego Spider-Man.

About STOMP Out Bullying
Created in 2005, STOMP Out Bullying is the leading national nonprofit dedicated to changing the culture for all students. It works to reduce and prevent bullying, cyberbullying, sexting and other digital abuse, educates against homophobia, racism and hatred, and deters violence in schools, online and in communities across the country. In this diverse world, STOMP Out Bullying promotes civility, inclusion and equality. It teaches effective solutions on how to respond to all forms of bullying, as well as educating kids and teens in school and online. It provides help for those in need and at risk of suicide, and raises awareness through peer mentoring programs in schools, public service announcements by noted celebrities, and social media campaigns.
Email ThisBlogThis!Share to TwitterShare to FacebookShare to Pinterest
Newer Post Older Post Home