*Disclosure: We were provided with a media rate at the Island Inn to help accommodate this feature. No monetary compensation was received. 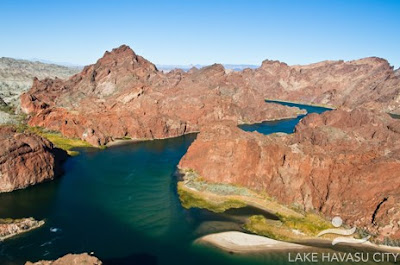 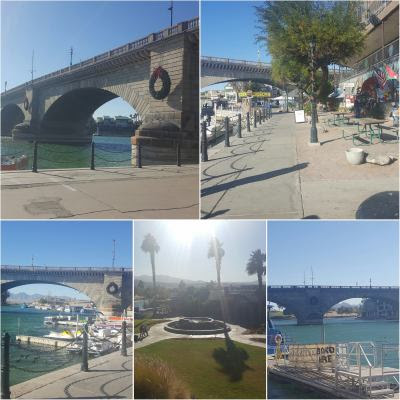 Our family absolutely loves to travel!  I really believe that the time you spend with your family making lasting memories are so much valuable than material things.  When you think of Lake Havasu, AZ - most will automatically
think "party town"  the town that all the college kids go to party come summer and spring break.  While that may be true to some extent, the off season is the perfect time for families to visit.  Lake Havasu is only a two and a half hour drive from Las Vegas, not bad!  And if you like to sight see, there's plenty of places to stop along the way like Nelson's Landing and Searchlight.  Once in Lake Havasu, it reminded me a bit of Boulder City, just bigger.  One thing we really enjoyed was no matter where we went, we pretty much always had the lake in view.  The major attraction within Lake Havasu City is London Bridge.  The London Bridge was purchased in 1964, then dismantled and shipped by boat from England to the U.S. It was rebuilt on a peninsula on Lake Havasu in 1971.  A Channel was excavated under the bridge and a replica English Village was built next to it.  This by far was my favorite part of the city and I'm actually looking forward to returning just to spend more time there.  Saturday was horribly windy and cold, so we didn't get out to much to sight see, but we did quickly walk the shops and check out the bridge - just beautiful! 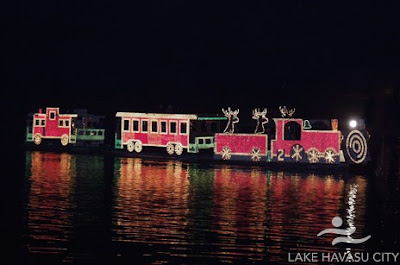 The English Village was decorated for the holidays and even had Santa visits available.  This past weekend was also their annual "Parade of Lights" event which featured brightly decorated boats in their holiday best cruising through the Bridgewater Channel under the London Bridge. What a sight to see!  I was afraid they would cancel it due to the high winds, but it had calmed down enough for them to sail.  We ended up having dinner at  Javelina Cantina on Saturday night during the Parade of Lights and was able to watch it from the restaurant, just make sure to make reservations early as it does get crowded.  Parking can also be tough, so if your planning on coming down to the Village, allow ample time, you might want to get there a couple hours early and make a night out of it.  The London Bridge Resort does have an ice skating rink up for the holidays which you can enjoy leading up the show.  The visitor center at the London Bridge also has a walking tour available which takes about an hour and is $10 for adults, kids are free. 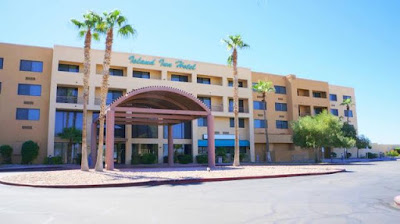 We stayed at the Island Inn right across the bridge on the island.  If you're looking for a budget hotel this would be a great option.  It's not even a two minute drive across the bridge.  The hotel is a bit dated, but the price is very accommodating as well as it's appeal to families. They has a pool, spa, eating area and even a ping pong table set up to keep the kids busy.  They do also serve a continental breakfast, but I would recommend going elsewhere for breakfast - they had bagels and store bought donuts, all hard and not fresh.  Our room was decent, with no complaints.  The beds were soft and comfortable and the view from our room was gorgeous! 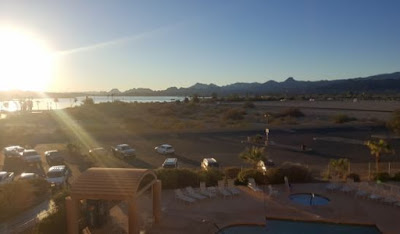 When you're looking for your next weekend getaway, I highly recommend giving Lake Havasu a try - you will be glad you did!
Visit  www.golakehavasu.com for more information and help in planning your next trip!

Lake Havasu City, home of the historic London Bridge, is situated on the eastern shore of Lake Havasu on the Colorado River border of California and Arizona. The City was established in 1963 by Robert P. McCulloch, Sr., as a self-sufficient, planned community. Lake Havasu City is located in Mohave County, Ariz., and encompasses 42 square miles with 428 miles of streets. Situated off Arizona Highway 95, an 18-mile drive north leads to Interstate 40, and a 65-mile drive south leads to Interstate 10.Lake Havasu City is located on what is known as the “West Coast of Arizona,” three hours driving time west of Phoenix, 2½ hours south of Las Vegas and four to five east of the Los Angeles region. The area attracts 775,000 visitors a year thanks to its calm waters, beautiful beaches, and desert weather with more than 300 sunny days a year. There is a range of restaurants and lodging, plus a boatload of annual events.