TUNE IN – SUNG HISTORY ON DREAMWORKSTV 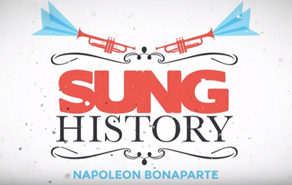 I absolutely love this!  I home school both my children.  Virtual classrooms can sometimes be a bore and I have always agreed that fun and interactive learning is the best way to go.  History class especially can be a little boring some times.

That's why DannyTieger and DreamworksTV created Sung History! Two minutes of musical mischief that's guaranteed to have you singing along with some of the biggest historical figures of all time.

I had my kids watch it who are 11 and 12.  While they thought it was a bit hard to understand at times, it does provide the words and a very catchy tune.  Once watched a couple times, it quickly becomes a memory.  Music has always been a great way to learn.  It really makes it so much more fun, interesting and all while retaining important history.  Coming up – take a funky and fresh look into the historic stories of Marie Curie, Ghandi, the Wright Brothers, and more.