Plan ahead this holiday season – Buzzed Driving is Drunk Driving 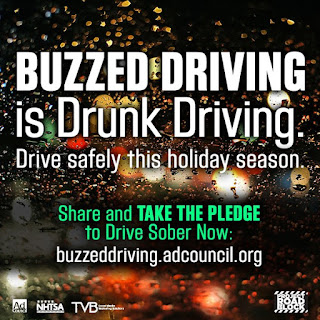 The holidays are a time to celebrate with friends and family. But it’s also a time to make sure you are keeping the ones you love safe. Whether you’re at a holiday gathering or a New Year’s Eve bash, many of our social plans involve driving.

According to the National Safety Highway Traffic Safety Administration (NHTSA) the period between Christmas and New Year’s typically has one of the highest rates of impaired driving fatalities.

Fatalities related to drunk driving are 100 percent preventable and the spike in buzzed driving around the holidays is especially alarming.


Let's ring in the New Year safely and plan ahead, designating a sober driver before they going out this year. Visit http://buzzeddriving.adcouncil.org/ to sign the pledge to not drive buzzed and learn more about buzzed driving and the dangers that can come with it.
Email ThisBlogThis!Share to TwitterShare to FacebookShare to Pinterest
Newer Post Older Post Home