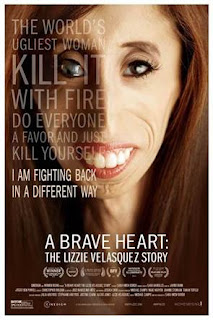 In honor of National Bullying Prevention Month this October, a group of incredible celebs came together stand with Lizzie Velasquez and her campaign against bullying.

Lizzie, who has a rare syndrome that prevents her from gaining weight, started her fight against bullying after a cyberbully posted a YouTube video of her labeled “The World’s Ugliest Woman.”  Now a motivational speaker, activist, and subject of the documentary A Brave Heart: The Lizzie Velasquez Story, Lizzie is rallying to pass the first federal anti-bullying bill The Safe Schools Improvement Act.

Synopsis:
A BRAVE HEART follows the inspiring journey of 26-year-old, 63-pound Lizzie from cyberbullying victim to anti-bullying activist. Born with a rare syndrome that prevents her from gaining weight, Elizabeth “Lizzie” Velasquez was first bullied as a child in school for looking different.  As a teenager, she was bullied online when she discovered a YouTube video labeling her “The World’s Ugliest Woman.” The film chronicles unheard stories and details of Lizzie’s physical and emotional journey up to her multi-million viewed TEDxAustinWomen talk (#1 TEDWomen event of 2013) and follows her evolution as motivational speaker and activist as she lobbies Congress for the first federal anti-bullying bill: the Safe Schools Improvement Act (SSIA).