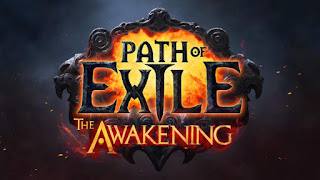 Get an in-depth look at Path of Exile: The Awakening, the biggest and most-far-reaching expansion of the game to date, with World Champion San Francisco Giants outfielder Hunter Pence and Alexis Cozombolides play the game live on the Let'sGetLexi Twitch broadcast! Hunter and Lexi are great! I've been watching them for awhile and their personalities just click.  If you're a San Francisco Giants fan, you'll love getting a look at Hunter from off the baseball field.  I've had the opportunity to meet him in person and was really impressed.  His personality is what brings out the best in him as a person.  Join me today to get an in-dept look at Path of Exile with Hunter & Lexi!

About Path of Exile:
Since the game's release in October 2013, Path of Exile has exploded into more than just a community of 11.2 million players worldwide, it has become a massive RPG phenomenon. Path of Exile is an online PC action role-playing game set in a dark fantasy world. Featuring ethical micro-transactions, the game is free-to-play, but never pay-to-win. Playing as one of seven character classes, players find themselves banished for their past misdeeds to the dark fantasy world of Wraeclast. There, they encounter hundreds of species of opponents laden with loot and mysterious artifacts as they explore the abandoned continent. The biggest and most far-reaching expansion of the game to date, The Awakening takes the player on a dark journey as they descend into the depths of nightmare. Great secrets about the world of Wraeclast will be discovered and even greater battles will be fought.  www.pathofexile.com
Email ThisBlogThis!Share to TwitterShare to FacebookShare to Pinterest
Newer Post Older Post Home