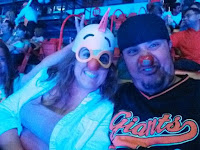 *Disclosure: Our family was provided free tickets to attend opening night.  All opinions are of my own and no monetary compensation was received.

Thursday night we had the opportunity to attend opening night of Ringling Bros Extreme Circus here in Vegas.  I was excited, I'm a fan of the circus and was looking forward to a family fun night out.  We did have fun, I do have to admit that, as a family we always try to turn any situation into fun!  Walking out after the show, I will say that I was a bit disappointed.  There was not much "extreme" about Ringling Bros Extreme Circus.  That is what I was looking for.  While there were certain parts that I did enjoy, that I was expecting to see - such as the elephants and the tigers (my favorite), they even had little poodles dancing around, which my daughter loved!  This was not a three ring circus, something I did expect, maybe that is just how I always have seen the circus - as three entertaining rings.  Look at those tigers....so huge and beautiful! 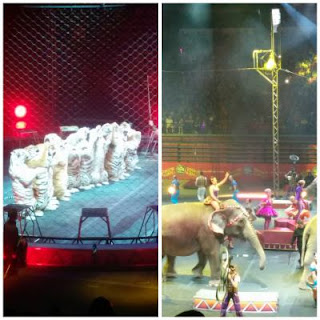 So honestly I'm not sure who planned out this one, but they were way off.  Two things that were added to this years "Extreme Circus" were some bmx bike riders, which don't get me wrong, we love that kind of thing, just did not fit with the circus; and also some ladies riding camels around in circles - not very entertaining; even my daughter said "that's it"! Just wasn't extreme to me.  When I think of the circus I think of odd, attention grabbing, edge of your seat extreme, like the sword swallowing - which they did have.  I did miss the motorcycles that go around in a caged ball - that was taken out as well.   The kids did enjoy it, we did have a fun time making the best of it, just was not what we were expecting.   I enjoyed the tigers, elephants and the high wire acts - but that was as extreme as it got, which is not much being the circus.  Even the next day my husband said the same thing.  He was also expecting more "extreme".  There was a lot of singing and dancing - which kinda reminded me of just anther Vegas show.   My daughter even mentioned that it was more like a musical rather than the circus.   If you are looking for something to do, some family fun and entertainment, I would recommend, but if you are looking for the "extreme" circus show -this is not it.