Who's ready for more ORANGE? 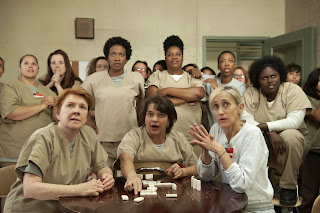 Me me!!  I love that show! I fell in love with season one and was a bit disappointed in season two. So hoping season three will be better.  What about you? Are you ready for more Orange is the New Black or have you been waiting for the perfect opportunity to start the critically-acclaimed, award-winning Netflix original series?

Well, click on this new trailer just released by Netflix that should get you going, and catch up now exclusively on Netflix at netflix.com/OITNB.

Season 3, which launches exclusively on Netflix on Friday, June 12th.  And there's more!  #OrangeCon coming June 11th. Be there.

Orange is the New Black has garnered more than 20 awards including three Emmy Awards, two SAG Awards, two AFI honors, three Critic’s Choice Television Awards, one NAACP Image Award, one PGA Award, two GLAAD Media Awards, and is a recipient of a Peabody Award and a Television Critics’ Association (TCA) Award.
Follow @OITNB and  http://facebook.com/OITNB for more information in the weeks to come