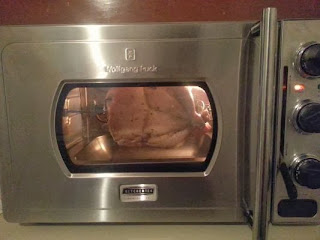 **Disclosure:  Our family was sent a Wolfgang Puck  Oven to experience to help facilitate this feature.   No monetary compensation was received.

Looking for the perfect gift for the cook in your home?  Do you ever walk by the deli section of your grocery store eying those yummy rotisserie chickens wishing you could just make one at home?  Now you can and in the fraction of time!  Wolfgang Puck, one of the most influential chef-restauranteurs in America, is credited with reviving California’s rich culinary heritage. He now has something new for home chefs who share Mr. Puck’s talents through his appliances - The Wolfgang Puck oven! This Oven consists of breakthrough cooking technology -- the flavor and speed of a pressure cooker married to the versatility and form of a conventional oven! Bake. Roast. Broil. Toast. Rotisserie. Reheat. The Wolfgang Puck Oven does it all! I was so excited to be able to cook my own rotisserie!! I'm definitely not the cook in the family, my husband usually does all the cooking, especially if we want a good tasting meal.  This was SO easy to make!  I had my husband tie up the checking so it wouldn't flop around and stuck it in the oven! Trussing a chicken will help the meat keep its shape while cooking more evenly. It even helps prevent drying out since it locks in moisture and flavor. Simple!  I kept having to go back to the oven window just to look at it, it was so pretty turning and seeing the golden brown come to color!   This is my completed chicken below - so pretty!! Never again will I have to run to the grocery store to pick up a chicken - I can whip one up in my own home in one third of the time! Wonderful & it was so juicy & yummy! Even better than the chicken you get at the store deli! 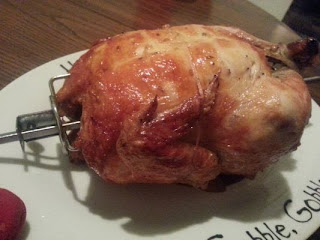 Visit http://puckoven.com/ for more information, where to buy and some starter recipes!

You can also join their social networks here -