The holidays are the ultimate season of giving and we're not just talking to each other.  As many of us are pulling together shopping  lists and gift guides (we know you’re  trying not to wait until last minute!), you might want to stop and think about a slightly different kind of gift – the kind  that gives back. Our family loves to give back year round and this time of year gives you even more of a fuzzy feeling! This year, Hard Rock is making the holiday season all the merrier with the 2013 IMAGINE THERE’S NO HUNGER campaign which  provides aid to the hungry and directly benefits WhyHunger and its grassroots partners worldwide. By purchasing the limited-edition IMAGINE merchandise, you won’t  only  surprise someone special, you’ll also help  someone  in need!  Hard Rock’s 2013 IMAGINE  products are  stylish, affordable gifts that fit your budget and the spirit of the season!  You gotta check out the scarf - how flipping cute is that!?! 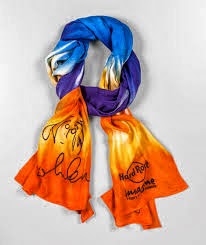 In a time where 1.4 billion people live below the poverty line, 820 million people are undernourished, and 16,000 children die from hunger-related causes every day, it’s hard to imagine John Lennon’s vision of  a  world with no hunger. To ensure that the message  Lennon sent  in his iconic song “IMAGINE” lives on  today,  artist and musician Yoko Ono Lennon again joins  forces with Hard Rock International and  WhyHunger for IMAGINE THERE’S NO HUNGER. In  its sixth  year, IMAGINE is a global campaign to  fight childhood hunger and poverty through the support of sustainable agriculture education and nutritional  feeding programs. To date, IMAGINE has helped communities in 22 countries grow enough  food to provide over 7.2 million nutritious meals to children, supported programs that taught over 8,800 family and community members techniques for sustained food production and raised more than $5.6 million to help fight childhood hunger.
Email ThisBlogThis!Share to TwitterShare to FacebookShare to Pinterest
Newer Post Older Post Home