“Battle of the NASCAR Kids” 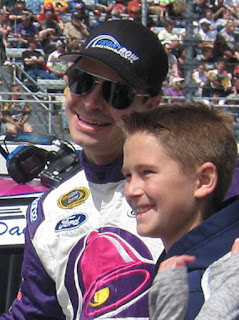 Activision Publishing, Inc. is proud to announce the list of children and families competing in the “Battle of the NASCAR Kids” championship tournament at the Homestead-Miami Speedway the weekend of the NASCAR Sprint Cup Series Championship on November 19.   Utilizing the NASCAR Unleashed videogame, Activision is taking the storied rivalries and competitive NASCAR spirit off the track and putting them in the hands of NASCAR kids, who will compete against one another for pride and glory. As their dads coach and their moms manage them, these kids will race for first place and the honor of being crowned the first ever “Battle of the NASCAR Kids” champion. The event aims to bring together NASCAR families and ultimately raise money for charities. Post race all the racers will band together to hand a check to The NASCAR Foundation for $25,000 from Activision; while the winning driver will be awarded an additional $5,000 for the charity of their choice.
The following is a list of the players who will be competing and the drivers and charities they’ll be representing:
·         J.J. Yeley’s daughter Faith will be racing for Jake Raborn Foundation
·         Juan Pablo Montoya’s son Sebastian will be racing for Formula Smiles
·         Travis Kvapil’s son Carson will be racing for NASCAR Dreams
·         David Gilliland’s son Todd racing for Sherrills Ford Optimist Park
·         David Blaney’s son Ryan racing for Alzheimer’s Association
Joey Logano, driver of the No. 20 GameStop Toyota in the NASCAR Nationwide Series, will be coaching all the players in the bracketed tournament. Since Logano is an avid gamer himself, he will choose two wild card racers from the crowd of fans assembled to watch at Homestead prior to the tournament to compete.  If one of his wild card picks win, they'll take home the $5,000.
The “Battle of the NASCAR Kids” competition will take place at 10:30am on Saturday, November 19 at the GameStop videogame truck outside of Gate 2 in the Outer Display Area of Homestead-Miami Speedway, with public gameplay sessions and practice rounds scheduled for November 17-18 at the Championship Drive event in Miami Beach. For more information on the event or about NASCAR Unleashed, join them at facebook.com/NASCARUnleashed.
NASCAR Unleashed is the next game-changing installment in NASCAR videogames with a frenetic and arcade style that maintains the principle feel of NASCAR racing. With phenomenal speed and pulse pounding gameplay, break out of the oval and onto the pavement of city streets, country roads, and sandy beachfronts! NASCAR Unleashed is available November 1 for Xbox 360 video game and entertainment system from Microsoft, PlayStation3 computer entertainment system, the Wii system from Nintendo and the Nintendo 3DS hand-held system at $39.99.
Email ThisBlogThis!Share to TwitterShare to FacebookShare to Pinterest
Newer Post Older Post Home