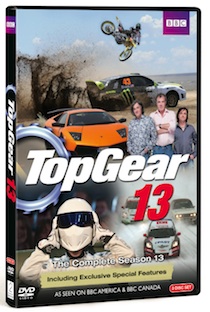 **Disclosure: Our family was provided a review copy of the movie for posting only - no monetary compensation was received.

Synopsis:
"Season 13 of this BAFTA-winning show skids, roars and explodes its way back onto DVD, with man versus machine experiments, exhaustive road tests of the latest models, a look back at the history of motoring, weekly power tests featuring the world’s most exotic super-cars… and a surprise revelation.
Hot on the heels of their epic challenge in Vietnam, Jeremy, Richard and James are no less ambitious for Season 13. James goes for a ride with stunt-driving legend Ken Block; Richard travels to Abu Dhabi to test the new Lambo Murcielago LP640-4 SV; the boys buy three £1,500 rear-drive sports cars and somehow find themselves entered in a terrifying French ice race. Elsewhere, Jeremy and James attempt to understand what makes a great Volkswagen advertisement – and then try to film one of their own. Rather predictably, it doesn’t go well. And in a television-first, the mysterious Stig takes off his helmet to reveal just who he really is…

The Stig continues to put the rich and famous through their paces out on the test track in ‘The Star in the Reasonably Priced Car’. Celebrities include Michael Schumacher, Olympic Gold sprinter Usain Bolt, actress Sienna Miller (who has just passed her driving test), AC/DC’s singer Brian Johnson and ‘the biggest petrolhead in the world’ Jay Leno."

What more could I say - my kids loved this show!  We had never heard of it before we were giving the opportunity to watch it - but any movie with fast, cool cars - gets the kids approval!  Own it on Blu-Ray today - visit www.BBCAmericaShop.com
Email ThisBlogThis!Share to TwitterShare to FacebookShare to Pinterest
Newer Post Older Post Home