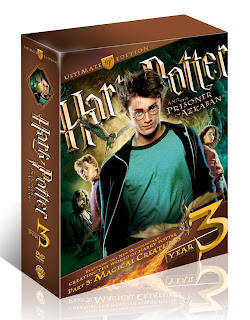 **Disclosure: Warner Bros provided our family with review copies of both products to help facilatate this review.  No monetary compensation was received.

If you can believe this....I personally have never seen a Harry Potter movie!! My oldest son loves the series and watches all of them.   So he help get me caught up for the review.  What I love is the imagination and adventure that come from the Harry Potter movies.  This is truely what holds the audience in my home.  Especially with my six and seven year old - they were glued to their seat!  This is a great series that the whole family can enjoy - and you don't find that very often! 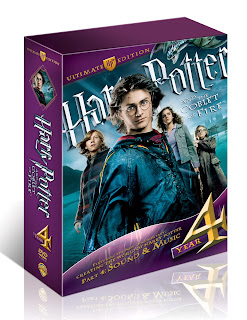 Harry Potter and the Prisoner of Azkaban Ultimate Edition Includes:

Never-before-seen footage of the Creature Shop! Explore never revealed concept drawings, interviews with creators who describe the quest to create real creatures with emotional power to move the adventure forward. Go behind the scenes with Daniel Radcliffe, Rupert Grint and Emma Watson as they interact with a marvelous menagerie from magnificent Buckbeak to malevolent Dementors. Watch creatures develop from page to sketch to model to screen. Discover how actors are transformed from humans to rats and werewolves. Witness Voldemort’s evolution from grotesque, infant-like creature to the Darkest Force of all.

Harry Potter and the Goblet of Fire Ultimate Edition Includes:

For the first time, discover how musical themes for Harry, Hedwig, Luna and Lord Voldemort define each character’s identity. Learn how sound effects experts create the crunch of footsteps on snow and the whoosh of a flying broomstick. Visit recording studios and see how each composer brings his orchestral vision to the films. Plunge into fun as Daniel gets the sound of underwater. Feel the magic as music is added to a scene, intensifying the emotion and steering the story.
Email ThisBlogThis!Share to TwitterShare to FacebookShare to Pinterest
Newer Post Older Post Home