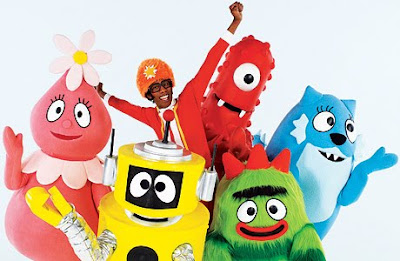 YO GABBA GABBA! announces the launch of the Cool Tricks contest which provides an opportunity for fans across North America to show-off their unique talents. Gabba fans are invited to upload a :30-:60 second video demonstrating their Cool Trick to win the opportunity to receive a VIP Family 4 Pack and have their winning video played during intermission at the KIA Motors Presents YO GABBA GABBA! LIVE!: THERE’S A PARTY IN MY CITY! show closest to their hometown. All participants are also automatically entered into a sweepstakes where one lucky fan will receive a five night trip for four to the Caribbean or Mexico.

In addition, each winner will also receive $100 worth of organic baby food, toddler, and lunchbox snacks and two “Party In My Lunchbox” Yo Gabba Gabba! Live! concert t-shirts from Revolution Foods and Plum Organics. Grand prize includes roundtrip air, Junior Suite accommodations, and all meals to a choice of Palladium Hotels & Resorts. How cool is that!!

To enter the contest, participants must upload their video to Facebook at http://facebook.yogabbagabbalive.com. Winners are determined by public vote in each tour market. So be sure to get all your friends and family to vote for you!

Cool Tricks began on Wednesday, August 18 and winners will be notified and announced prior to the show date in each local market. The entry period for the grand prize sweepstakes will end on Sunday, Dec 12. See official rules at http://facebook.yogabbagabbalive.com.

Cool Tricks is a popular segment on the television series where children and adults show off their special talent or skill (gymnastics, cup stacking, break dance move, etc.). Celebrities such as Tony Hawk performing a skateboard move and Rhys Darby doing the robot have appeared on Cool Tricks.