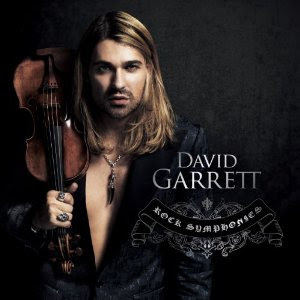 **Disclosure: This is part of a campaign through Team Mom. I have not been compensated for this feature and all opinions are of my own. Your opinion may very.

Now I know the Mom's out there are probably saying "Who's that hot guy?" LOL! He is a cutie isn't he! David Garret, named best-selling new classical artist of 2009. He has just released his second album titled Rock Symphonies.

A few fun facts about David Garrett -
His newest album, Rock Symphonies brings together Garrett's great loves: classical music and the rock music of his generation. The album uniquely blends classical violin with rock-and-roll songs from bands such as Led Zeppelin, Aerosmith and Nirvana. I wasn't sure what to expect when I first heard we would be reviewing this cd. I like classical music, but it's not something I will turn on the radio and listen to. Then I heard the rock part - and wow! This is really amazing, I even keep this cd in my car now and play it for the kids on our long drives. Yes....maybe I might like it more than they do :) It makes a for a fun ride while we all "rock out"!

You can catch Garrett on PBS this month during a special showing of his sold-out Berlin show, where he preformed in front of over 18,000 fans!

My kids and I give this album thumbs way up!! So much better than expected and has become a family favorite!! The album debuted at #2 on the Billboard Classical Crossover chart (second to Sting at #1) and is still holding its position.

Rock Symphonies is available at Best Buy, iTunes and www.amazon.com