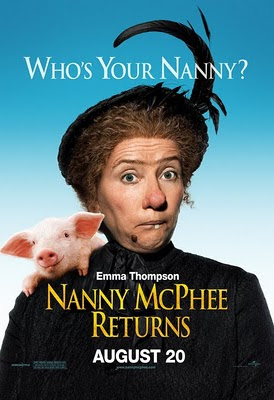 **Disclosure: Universal Pictures provided our family with screening passes to see this movie. No compensation was received and all opinions are of mine and my families own. Thanks Universal!!

I have watched the first one on TV with the kids many times. Such a cute movie. I take it as the modern version of Mary Poppins! I have to admit that the movie took a bit to get into. It starts off a bit slow, in the country with a wife of a deployed soldier raising her two children on her own all while trying to support the farm they live on. The two children are just like any other children as they seem to fight about everything! There two cousins end up coming to stay with them which gives Mom an even bigger headache. As a Mother I could totally relate!! Just a break, time for myself, yeah sure, that's not even thought of here! That make the perfect entrance for Nanny McPhee. There are five lessons that she goes through teaching the children. There's adventure, fun, comedy, family values and true love. By the end of the movie I was crying......there's not many families these days like the one in the movie. There are so many lessons and moments that make you think how we make today's life so complicated compared to the "good ol' days"! Wonderful Movie!! I really loved Emma Thompson!

In Nanny McPhee Returns, Oscar-winning actress and screenwriter Emma Thompson returns to the role of the magical nanny who appears when she’s needed the most and wanted the least in the next chapter of the hilarious and heartwarming fable that has enchanted children around the world.

In the latest installment, Nanny McPhee appears at the door of a harried young mother, Mrs. Isabel Green (Maggie Gyllenhaal), who is trying to run the family farm while her husband is away at war. But once she’s arrived, Nanny McPhee discovers that Mrs. Green’s children are fighting a war of their own against two spoiled city cousins who have just moved in and refuse to leave.

Relying on everything from a flying motorcycle and a statue that comes to life to a tree-climbing piglet and a baby elephant who turns up in the oddest places, Nanny McPhee uses her magic to teach her mischievous charges five new lessons.


Our Family rates Nanny McPhee as a MUST SEE!!