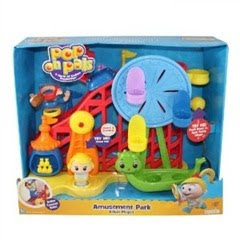 **Disclosure: I received this same product from Team Mom to review in order to write an honest review of this product. All opinions are mine, your opinion may vary. Thanks Team Mom for another great product review!

Pop On Pals is a whole new world of "Popabilities" from Spin Master. With endless mix n' match fun, little ones can be anything they want to be. A fireman can become a musician, a princess becomes a baker, a puppy becomes a ballerina -Pop On Pals encourage imaginative play and help develop fine motor skills.

It says on the box it's for ages 2-4 for which I think is appropriate. My youngest is five so when I saw this I was not sure how it would site with the kids. I finally pulled it out and as soon as she saw it she was ecstatic!! I could not take it out of the box fast enough before she'd be grabbing at the pieces. We received the Pop On Pals Amusement Park Play Set that you see below. Although it only comes with one kid. This set reminds me of the little people toys that I use to play with as a child. I remember my sister and I loved them so much we always had them on our birthday / Christmas lists and I think this will be just as much fun and as wanted as little people was to us when we were kids. 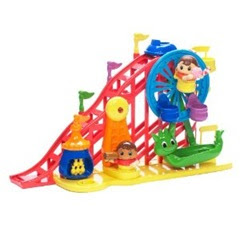 The only disappointing thing about this product is that it only comes with one "Pal". But, on the flip side it did come with three different outfits (which are inter-changeable rings) for your pal. My daughter loves to play with things like this. What I love also about the Pal's is that they are wider than the little people were. So if your toddler happens to love to put things in their mouth such as mine did when they were younger you won't have to worry about them chocking on them. Just in this little play set there was so much to do. The sounds and the music was awesome! For example when you put your pal on the strong man striker and push down it will sound as if you hit the top and the light even goes off!

This scores high in my book as a toddler toy. Bringing imagination to life - being anything you choose to be. It can help little ones develop fine motor skills and are perfectly sized for small hands to play with and signature "pop" sound adds to the fun!

There are a number of Pop On Pals packs and play sets to choose from and are available at Toys "R" Us, Target, Kmart, Sears and more. The Pop On Pals Amusement Park Play set retails for $34.99.