Have you seen Mickey lately? 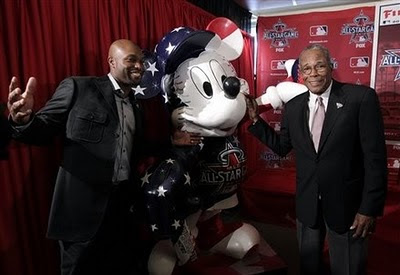 Angels Outfielder Tori Hunter and Hall of Famer Rod Carew pose with the MLB All-Star Stars & Stripes themed Mickey Mouse statue, which will be on display at the Anaheim Convention Center, home of the MLB All-Star FanFest.

I am so so excited that the MLB All-Star festivities will be starting this week! My kids all play baseball so this is something that the entire family has been waiting for!! A few weeks ago we had spent some time hanging out in Hollywood and noticed that there were life-sized Mickey statues around in different baseball uniforms. At first I had wondered - why the heck we're there Mickey's dressed in other teams baseball uniforms? I thought maybe it was just a tourist thing and did not think about it again. Then a couple weeks after that I saw another one - down in Orange County. I just had to find out what this was all about. As it got closer to All-Star week I had figured it was for MLB All-Star week - but decided to write Disney to confirm my suspicion.

Thirty-six varieties of statues including designs for all 30 clubs are to celebrate the 2010 MLB All Star Game on July 13Th. The statues have been placed in high-profile areas throughout Anaheim, Los Angeles and surrounding areas in Southern California including Angel Stadium, Downtown Disney, L.A. Live and the Hollywood Walk of Fame area. Each life-sized statues is 7.5 feet in height and weighs 989 pounds!!!

Miniture versions of each of the statues are also available in a 7.5 inch size through MLB.com and DisneyStore.com. In addition to the statuettes, fans can also obtain a wide variety of merchandise and apparel featuring Major League Baseball and beloved Disney characters in time for the All-Star Game! As a Mother I get so excited and touched seeing something like the good old game of baseball bringing so much joy and excitment to my children. My daughter who is only five up to my oldest son who is 14 - all having a good time with good old fashion fun. Role models that they can look up too and inspire to be......

The 81st Major League Baseball All-Star Game will be played on Tuesday, July 13th in Anaheim. For more information about the All Star Game and the festivites leading up to the game, visit www.mlb.com