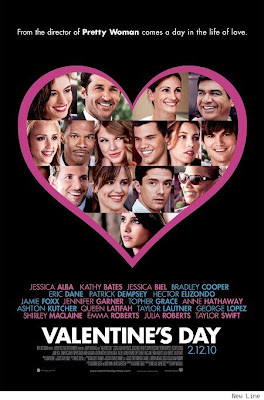 **Disclosure: Warner Bros sent us this movie for review purposes only - no other compensation was received.

Watching the commercials leading up to this movie gave you a lot to take in and expect. So many great actors and actresses you automatically think it's going to be a huge hit. One thing that really drew me to this movie is that the actors in it are ones that I see as true, honest, sincere, kind and fan friendly stars. You will find yourself laughing as they go through so many different love stories - that you will have been through at least one of them! I have read some reviews that the actors just did not get enough screen time and that there was just not enough time to be able to enjoy each character. I actually enjoyed that aspect - some actors I did not want to watch and others it was like watching them do a little skit!

Synopsis - The starriest cast you may ever see sparkles in a hilarious and heartwarming romcom from the director of Pretty Women and The Princess Diaries. Stories crisscross, collide and boomerang in this look at a day in the life of love. There's a proposal. Flowers that didn't get sent. A big fat secret that's finally told. The "I'll show up and surprise him" that ended up surprising her. Fights, kisses, wrong turns, right moves and more. Whether new to or through with love, you'll fall in love with this 19-star, funny-side-up celebration of romance.