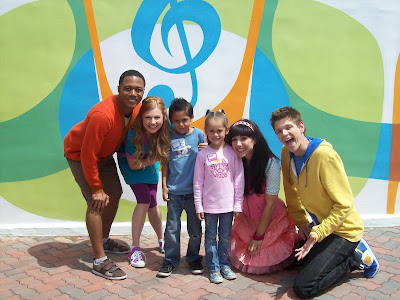 This past week my two little ones and I were invited to the Paramount Studios to get a behind the scene look at the Fresh Beat Band's new home in Los Angeles. The kids waited all week for this one - they were super excited!! From a mother's perspective I love shows like this one - there is no language we have to worry about, no rude remarks and no violence. Just plain fun!! When we arrived at Paramount Studios they had lunch waiting for us. Our hosts gave the kids coloring pages and crayons to pass the time. Lunch was so yummy and I loved that they thought of the little ones and served chicken nuggets (one of the only few things my daughter will eat). Being one of the first ones there we got to go back first to watch them tape a clip of an upcoming show. I was a bit worried about how the kids would do - but I think they ended up being so intimidated that they were as quiet as can be! During their lunch break they were nice enough to come outside to talk with us all. 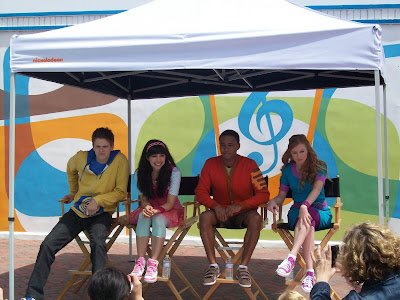 We were also lucky enough to get a tour of the set - it's so amazing how they fit so much into one building!! As we walked into Stage 13, we proceeded down Main Street - they kids could not believe they were actually there! It's so colorful, full of life and like walking into the Wizard of Oz a bit. 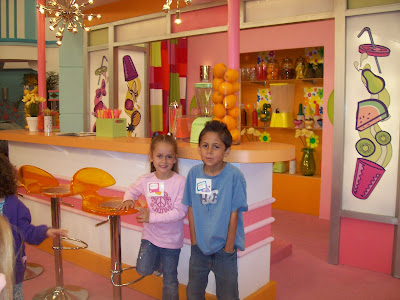 Scott Kraft (pictured below) and Nadine Van der Velde are the creators of the Fresh Beat Band (and husband and wife might I add) Scott was so insightful and seemed to have just as much energy as the characters have!! We loved touring with Scott as he gave us the inside of how the taping is done as well as showing us around the many different scenes they had set up for the show. He was also great with the kids - he had The Fresh Beat Band give a shout out to our kids in between their takes. 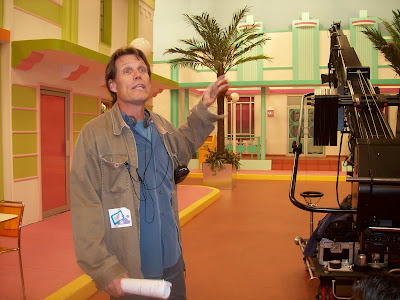 Courtesy of Nickelodeon below is some info on the show -

"The Fresh Beat Band is a live-action preschool musical sitcom set to original pop songs with preschool-friendly lyrics. Marina, Kiki, Twist, and Shout are the Fresh Beats--four best friends in a band who go to music school together and love to sing and dance.

For the Fresh Beats, just about any situation can lead to a full-blown song-and-dance performance. From the moment they wake up, everything that the Fresh Beats do is infused with musical fun. All songs embody an upbeat, contemporary format with preschool-friendly lyrics that the whole family will enjoy.
advertisement"

What to check out the Fresh Beat Band live? They will be performing at the Los Angeles Times Festival of Books this weekend, April 24Th & 25Th at the UCLA campus. The event is free to the public - check the website for more information and show times.

Kids can also visit Nick Jr. for games, videos, crafts and even recipes from The Fresh Beat Band!

***Check your local listings for showtimes

**Disclosure: Our family was invited out to the Paramount Studios for a tour, lunch and a meet and greet with the band. No monetary compensation was received.