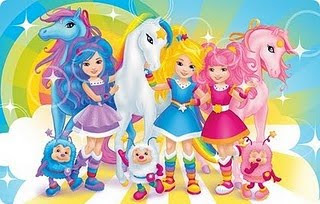 Disclosure: I was provided with the Rainbow Brite CD pack free of charge from BSM Media, Mom Select and Hallmark. No other compensation was received. All opinions expressed are my own and your opinion as well as experience may vary.

I really loved Rainbow Brite growing up, and was so happy to see it's return so that my own daughters can have that same experience as I did. I think what I always loved so much was the bright colors and how they would just catch my attention! They were always so happy, full of spirit, giving, helpful and most of all just plain fun!!

I was given a Rainbow Brite CD to give my children the opportunity to learn more about Rainbow Brite and interact in a way I only could have dreamed of! The CD included games, puzzles, songs and even a short animated Rainbow Brite feature. My youngest daughter just fell in love with Rainbow Brite and I have to admit I was pretty darn happy! LOL!

You may be asking who's Rainbow Brite? I hope you are not, but if you are, here is a bit of background -

"Rainbow Brite has delighted generations of children with her exciting and imaginative adventures. Among adults who grew up with the original cartoons and dolls, Rainbow Brite has a significant following as a nostalgic property…but her unique brand of sweetly futuristic fantasy – and her sincere message of courage, kindness and hope – make her a true 21st century hero.

When Hallmark first introduced the Rainbow Brite brand about 25 years ago, girls all over the world fell in love with this colorful character. Rainbow Brite was launched with a consumer products program that included toys, books, comic books, cereal, party goods and even a traveling stage show. Girls enjoyed Rainbow Brite as a TV series, in addition to three TV specials and a feature film."