Bake Me a Wish! 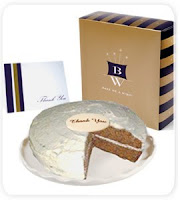 Economic times have taken a toll on all of us. Our family has personally experienced this with my husband becoming laid almost two years ago, and still unable to find work. There is no question that times are hard on so many people that never thought they would find themselves in the predicament they do today.

Here is the story of Angela Logan, a single mother of three facing forclosesure. Her home for the last twenty years suffered serious damage during a bad storm. The contractor she hired ended up causing even more damage to her house, forcing Logan to pay $50,000 in repairs and leaving her house unfinished. The modeling agency that hired Logan went belly up without paying her several thousands of dollars for jobs she had already completed. That's when her mortage payments started to go downhill. She then decided to set a goal and bake her way out of her financial problems.

She first set a goal of baking 100 cakes at $40 per cake in 10 days. Her and her four children set out to make what they called “mortgage apple cakes.” They figured out if they could sell 100 cakes at $40 dollars a piece they could make the payment on their home. After the local community heard the news and the press got wind of the story everything changed.

The Teaneck actress, who two weeks ago began baking apples cakes for friends in an effort to stave off foreclosure — and then was overwhelmed with orders for the $40 confection after a Record article ignited a media storm — is now partnering with an online seller of special-occasion cakes.

Logan has signed a contract with BakeMeAWish.com that will allow her to use the company’s baking plant on Long Island to fill her backlog of hundreds of cake orders. Bake Me A Wish employees will prepare the cakes under Logan’s direct supervision, and the privately held company will handle shipment, said BakeMeAWish founder and President Josh Kaye.

Logan, who was planning to visit a FedEx office Thursday to send off a crucial $2,559.94 check to her lender, currently is baking at the Hasbrouck Heights Hilton hotel, which offered a corner of its kitchen last weekend. The apple cake operation will move to Long Island as early as next week.

After Logan fills her pending cake orders, which are coming in from around the world, she will continue a business relationship with BakeMeAWish, said Kaye, who founded the company in 2004.

Kaye said mortgage apple cake eventually will become part of the company’s product line — the Web site was taking orders for it Thursday — and that proceeds from its sale will help other homeowners in financial distress.

This is truly a story of inspriation, and people coming together to help each other out. In these hard economic times it is even more important than ever to help, and give back to those in need. You never know when you yourself will be in a situation where you will be the one needing help. I encourage you to visit Bake Me a Wish and order a cake, not only will you be helping those in need, but will also get to try a cake that sounds wonderful!!